Knowing how to screen record on Android is advantageous if you want to record tutorials to explain how to use an app or any other feature on your device. You can do it to publish on social media, YouTube, or only to help a friend, for instance.

Besides, there are many other uses for recording a screen, such as saving a Zoom meeting that you wish to watch later or making a fun video. Check out this article to learn more about it!

How to Take a Screenshot on Android

If you are going to take a screenshot on a smartphone that uses the Android system, all you have to do is follow these steps:

1 - Go to the screen you wish to capture

2 - Press the buttons “power” and “volume down” at the same time. 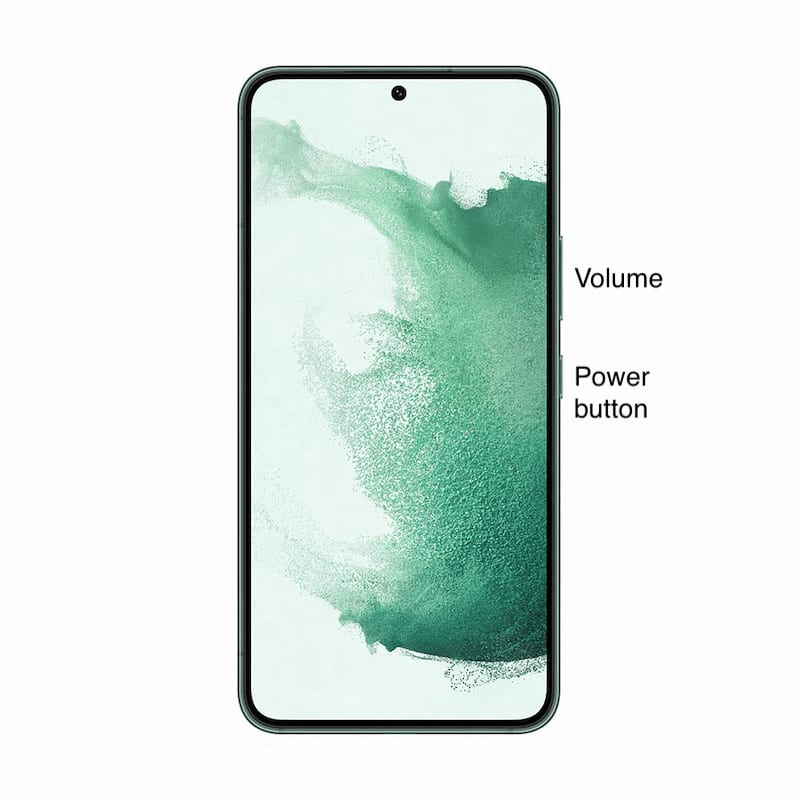 3 - The screenshot will appear on the corner of the screen confirming the procedure was successfully completed.

4 - After it, you can go to the gallery to see the screenshot, and edit it.

Notice that in some devices the buttons you need to press may vary. In some cases, to take the screenshot it’s necessary to press the power button for a few seconds, and then tap “screenshot”.

How to take a Scrolling Screenshot

Do you want to take a screenshot of a web page that doesn’t have all the information on one screen, without taking multiple screenshots? That’s possible and easy to accomplish.

You will follow the same steps above, but, at the bottom of the screen, you will have to tap “capture more”, then use the crop guideline to select everything you desire. 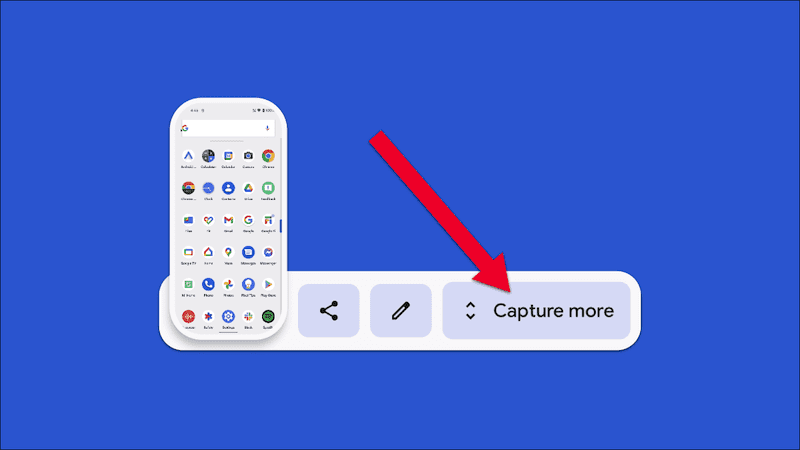 If you want to edit any screenshots, you can use the Google Photos to do that.

How to Screen Record on Android

Learning how to screen record on Android has become a much easier task since the latest device models (Android 10 and up)  already come with a built-up screen recorder feature. In this case, all you have to do is swipe down twice from the top of your screen, and tap on the “screen record” button.

Opt if you want to record the audio or only show the taps on the screen. After, select what you wish to record, and press the “start” button, which will be on the corner of the screen. After the countdown, the recording begins. 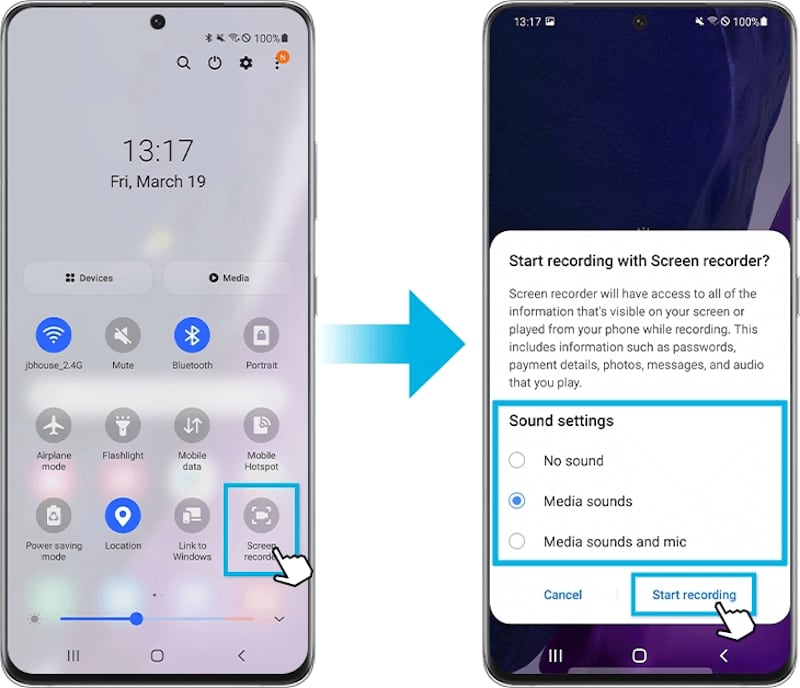 \ When you are finished, press the record button to stop. You can check the video in the media flies, camera roll, or gallery, depending on how it’s configured.

If you didn’t find the “screen record” button on your device, which is equipped with Android 10 or above, on the top of the smartphone screen click on the “more” menu icon, select “edit buttons”, then look for the “screen record” icon, and tap on to it to add to the notification panel. 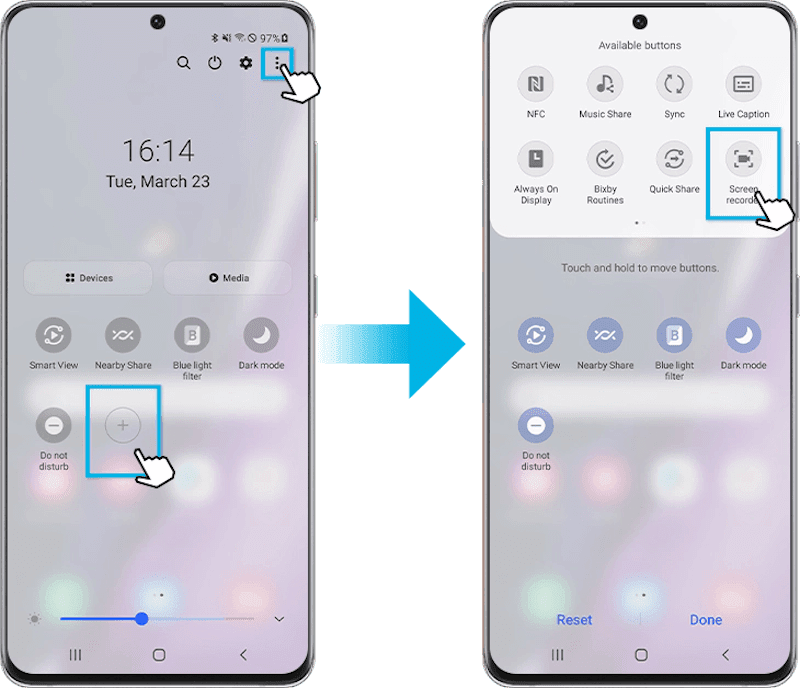 How to Screen Record on Android with Apps

If your device doesn’t have the screen record function built-in, don’t worry. There are several apps available that you can download to screen record on Android.

Available for free, the AZ Screen Recorder enables you to take screenshots, screen record, and even make lives. To record the screen, open the app, then click on the orange camera button, and you are ready to start. 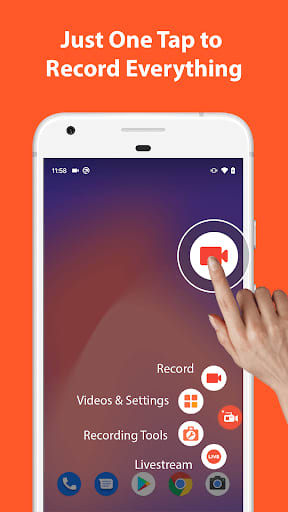 The videos recorded and the screenshots are saved inside the app, where you can share and edit them as well. In the app settings, you will also find options to configure the video resolution, the device orientation, and select if you want to record the audio too.

Are you a gamer? If so, a great option to screen record your matches is Google Play Games. It gives you the option to record the game in 480P SD or 720P HD resolution, but with an advantage. You can add footage from your smartphone’s front-face camera, showing your comments and reactions while playing.

After installing Google Play Games, open it and select the game you want to record, then click on record, and choose the resolution you prefer. Once you tap launch to begin playing, the record starts, and you will see the settings to control some aspects such as the audio and the front-facing camera.

ADV Screen Recorder is also a free app, with easy-to-use features that allow you to record your screen. You will need to access your smartphone settings to give the app’s permissions required to record, then enter ADV and tap the “plus” button to enable the recording feature.

Once you exit the app, you will see that a camera button will remain on the side of the screen. Press it to start recording, set resolution, add the front-face camera, and even draw on the screen. 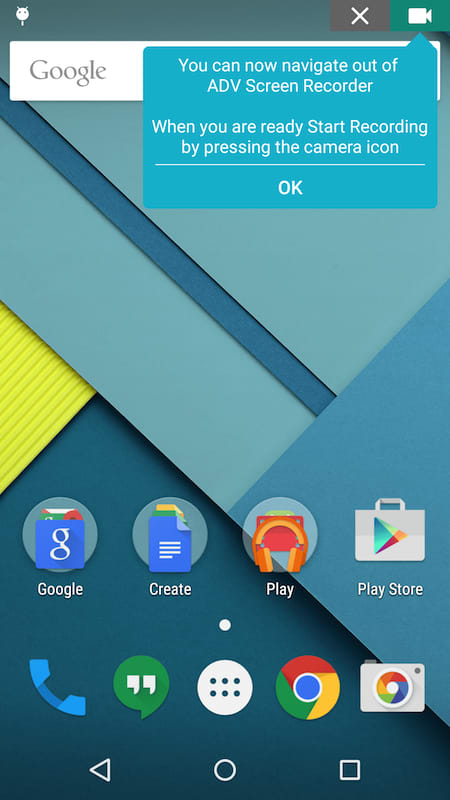 When you finish the video, it will be saved on the app where you can edit it. 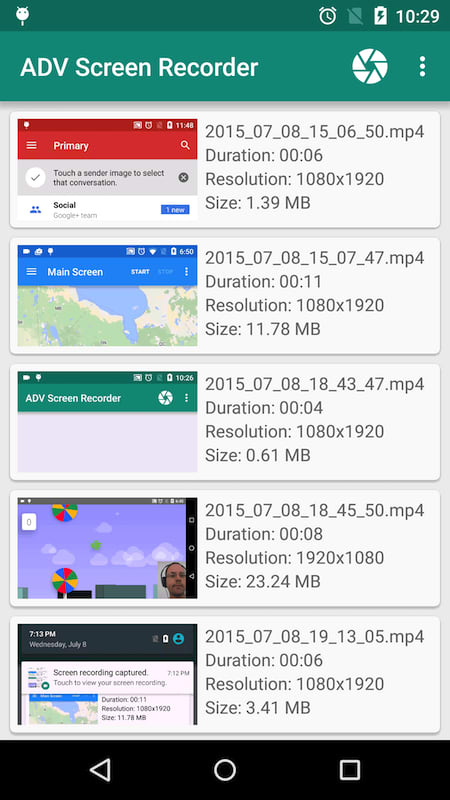 The camera icon remains on the screen even when you are not using the app, to remove it, keep pressing the buttons and drag it to the “X” that will appear on the bottom of the screen.

As you can see, learning how to screen record on Android isn’t a complicated task, on the contrary, all you have to do is follow some steps, and you can make thousands of videos. Choose the option that you find the best and enjoy it.

Share this article
Home Blog Resources How to Screen Record on Android
You'll like it as well ...
Sales
15 Best Selling Products Online: Get to Know the Market
If you are planning to open an ecommerce store, it’s important to know what are the best-selling products…
Marketing
Content Marketing for Industrial Companies: 6 awesome video ideas
Companies have long forgotten the concept of traditional marketing with posters and advertisement campaigns. Instead, content marketing ,…
Tools
Top 9 Outstanding Video Quality Enhancers in 2022
One issue with the recorded video is that you can end up with low-quality clips. Issues like this…
Start using JivoChat
Like what you've read?
Sign up and try JivoChat for yourself!
It's free and only takes a couple of minutes to download.
We'd like to certain analytics cookies to help us to improve our website by collecting and reporting information on how you use it. For more information please see our 'Cookies page'. Are you happy to allow cookies?
I refuse cookies I accept cookies